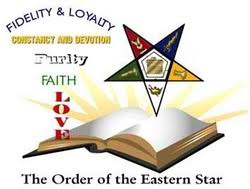 The Order of the Eastern Star, one of Freemasonry’s many appendant bodies, accepts both men and women as members.  To join the Order, men must be an affiliated Master Mason who is in good standing (dues paying member).

Originally, it was required that women members be related directly to a Freemason, either by birth (having a grandfather, father, brother, uncle, cousin, etc., even if that person is now deceased, as long as they were in good standing at the time of their death) or by marriage to a Freemason (in good standing).

Female members may be related to a Freemason in a number of ways, such as mother, wife, widow, daughter, sister, etc.  Members of other appendant bodies, such as the Rainbow Girls, Job’s Daughters may also choose to become members of the Order of the Eastern Star, upon their becoming 18 years old.

Today’s membership rules now allow extended (female) family members such as step-mothers, grandmothers, mothers-in-law, half sisters, step-sisters, sisters-in-law, daughters-in-law,  grand-daughters, great-grand daughters, step-daughters, the daughters of a sister or brother who has been legally adopted by them, nieces, and great-nieces.

How To Join and Become a Member of the Eastern Star

If you are interested in becoming a member of the Order of the Eastern Star and are related to a Freemason, ask him to request information from his lodge, or Grand Lodge about how you may contact them.